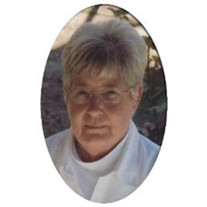 Funeral services for Mrs. Bessie Lee Emmott, age 68, a resident of Bloomington Springs, TN, will be held Monday, March 10, 2008, at 10 A.M. at Anderson - Upper Cumberland Funeral Home in Gainesboro, TN. The family has chosen cremation. The family will receive friends on Sunday from 1 P.M. - 9 P.M., and on Monday from 9 A.M. until time of services. Mrs. Emmott passed away on Friday, March 7, 2008, at her residence. She was born September 29, 1939, in Jackson County, TN, to the late Thurman Martin and Avon Cleo Martin. She was married to William Emmott, who survives. She was a factory worker, and a member of the Philadelphia Church of Christ. In addition to her parents, she was preceded in death by 1 Sister: Nell Hopkins; and 1 Brother: Roger Martin. Survivors include her Husband: William Emmott of Bloomington Springs, TN; 1 Son: Pat Flatt of Breaux Bridge, LA; 6 Grandchildren: Misty Wilson, Savannah Smiley, Maddie Beasley, Hailey, David and Joey Walker all of Cookeville, TN; 3 Great-Grandchildren: Sidney and Cleo Wilson and Presley Spear; 4 Brothers: Harold, Wayne and Dick Martin, all of Gainesboro, TN; Billy Martin of Bloomington Springs, TN; and 1 Sister: Wava Allen of Gainesboro, TN. Bro. Sam Mainord will officiate at the services.

The family of Bessie Lee Emmott created this Life Tributes page to make it easy to share your memories.

Send flowers to the Emmott family.