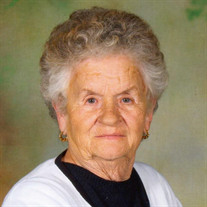 Graveside services for Betty Mayberry, 83, of the Nameless community of Jackson County, TN, will be held on Thursday, January 28, 2021, at 1 P.M. at the Curry’s Chapel Cemetery in the Nameless community of Jackson County, TN. There will be no visitation or services at the funeral home. She passed away on Monday, January 25, 2021, at Cookeville Regional Medical Center. She was born March 6, 1937, in Jackson County, TN, to the late Bernice Burgess and Gladys Davidson Burgess. She was married to the late William A. Mayberry, who passed away November 27, 2016. She was a retired factory worker, and a member of the Davidson Chapel Church of Christ and Nameless Community Club. In addition to her husband and parents, she was preceded in death by 2 Brothers: Blair Burgess and Barney Burgess; Sister in Law: Carol Burgess; and Brothers in Law: W G Burroughs and John A. Austin. Survivors include 2 Sons: Ronnie (Teresa) Mayberry and Ricky (Debbie) Mayberry, all of the Nameless community; 5 Grandchildren: Brad (Robin) Mayberry, Justin Mayberry, Cody (Chelsea) Mayberry, Austin (Briana) Mayberry, and Devin Mayberry; 7 Great Grandchildren: Jenna, Eli, River, Jase, Lorelai, Creeklyn, and Rowen; 1 Sister: Katherine Burroughs of Bloomington Springs, TN; and 2 Sisters in Law: Maggie Lou Austin of Chestnut Mound, TN, and Helen Burgess of Cookeville, TN. Bro. Jimmy Anderson will officiate at the services. Memorial donations may be made to the Nameless Community Center or the Nameless Fire Dept. by contacting the funeral home.

The family of Betty Mayberry created this Life Tributes page to make it easy to share your memories.

Graveside services for Betty Mayberry, 83, of the Nameless community...