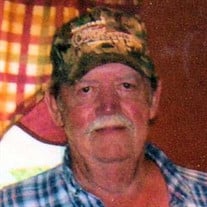 Funeral services for Bobby S. Hix, better known as "H.I.", 76, of the Dodson Branch community of Jackson County, TN, will be held on Wednesday, January 6, 2021, at 2 P.M. at Anderson Upper Cumberland Funeral Home in Gainesboro, TN. Burial will follow in the Dodson Branch Cemetery in Jackson County, TN. The family will receive friends on Wednesday from 10 A.M. until time of services. He passed away on Sunday, January 3, 2021, at Cookeville Regional Medical Center. He was born April 20, 1944, in Jackson County, TN, to the late Grover Hix and Nora Irene Mabery Chasteen. On January 31, 1975, he was married to Rita Hix, who survives. He worked with sheet metal and guttering in home repair. In addition to his parents, he was preceded in death by 1 Brother: Joe Hix; and 2 Sisters: Bonnie Hix and Doris Fugate. Survivors include his Wife: Rita Hix of Cookeville, TN; 1 Daughter: Tiffany Meadows of Cookeville, TN; 2 Sisters: Dimple Mounts of Cookeville, TN, and Mary Cantrell of California; and Grandchildren: Sydney Meadows and Conner Meadows. Bro. Ronnie Dunn will officiate at the services. Memorial donations may be made to assist with funeral expenses by contacting the funeral home.

The family of Bobby S. Hix created this Life Tributes page to make it easy to share your memories.

Send flowers to the Hix family.