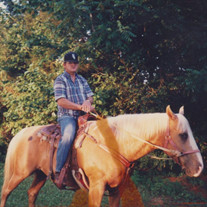 Bobby Ray Woolbright, 80, of the Dodson Branch community, walked peacefully into Heaven surrounded by his loving family on March 2, 2022. Bob, the son of the late Leander and Martha Woolbright, was a member of the Dodson Branch FWB Church. He was known for his quick wit and love of animals. He experienced his greatest joy riding his horse, working in a hay field, or on his front porch rocking a grandbaby. Beside his parents, he was preceded in death by his siblings: Donald, Cornie, Margie, Betty, and Dimple; and also his faithful companion of over 30 years, Bar Bar Deck. He is survived by his sweetheart of 60 years, Nancy Schaaf Woolbright; his siblings: Jim, Jean, and Judy; his children: Sheila (Brent) Chaffin, Jeff (Tammy) Woolbright, and Justin (Keshia) Woolbright; his grandchildren: Kaitlin (Luke), Derek (Jada), Molly (Jake), Jaycie, Lily Z, Ilyssa, Drew, Parker, and Asher; great grandchildren: Colton, Casen, Carter, and Magnolia; also his horse, Charlie, and 37 unnamed parakeets. Visitation will be on Saturday, March 5, 2022, from 10 A.M. – 1 P.M. at Anderson Upper Cumberland Funeral Home. Funeral services will be held at 1 P.M., with burial to follow in the Burris Cemetery in Jackson County, TN. Ronnie Dunn and Clayton Lee will officiate at the services. Grandchildren will serve as pallbearers. Memorials may be made to the American Diabetes Association or The Exceptional Bean by contacting the funeral home. Anderson Upper Cumberland Funeral Home in charge of arrangements. 931-268-1550

The family of Bobby Ray Woolbright created this Life Tributes page to make it easy to share your memories.

Send flowers to the Woolbright family.