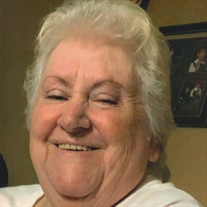 Funeral services for Brenda Sircy Cannon, 76, of the Center Grove community of Jackson County, TN, will be held on Friday, September 3, 2021, at 11 A.M. at Anderson Upper Cumberland Funeral Home. Burial will follow in Hermitage Memorial Gardens in Hermitage, TN, with graveside service at 3:30 P.M. The family will receive friends on Thursday from 11 A.M. – 8 P.M., and Friday from 9 A.M. until time of services. She passed away on Monday, August 30, 2021, at Cookeville Regional Medical Center. She was born September 18, 1944, in Jackson County, TN, to the late Carsey Edward Sircy and Gwen Dallas Sisco Sircy. She was married to the late James R. Tripp, who passed away August 24, 1981. She worked in healthcare as a CNA, and was a member of the Church of Christ. In addition to her husband and parents, she was preceded in death by her Brother: Dallas Edward Sircy; and Brother in Law: Jimmy Stafford. Survivors include 1 Son: James Ray Tripp, Sr. of Gainesboro, TN; 2 Daughters: Lisa Renee (Jeff) Janke of Hermitage, TN, and Karen (Jimmy) Lynn Cobble of Gainesboro, TN; 2 Sisters: Kathy Stafford of Whitleyville, TN, and Shira (Donnie) Stafford of Gainesboro, TN; 10 Grandchildren; and 16 Great Grandchildren.

The family of Brenda Sircy Cannon created this Life Tributes page to make it easy to share your memories.

Funeral services for Brenda Sircy Cannon, 76, of the Center Grove...

Send flowers to the Cannon family.