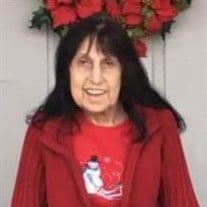 Funeral services for Carol Joyce Spivey Hammock, 72, of Gainesboro, TN, will be held on Tuesday, December 22, 2020, at 2 P.M. at Anderson Upper Cumberland Funeral Home in Gainesboro, TN. Burial will follow in the Old Antioch Cemetery in Jackson County, TN. The family will receive friends on Tuesday from 10 A.M. until time of services. She passed away on Sunday, December 20, 2020, at her residence. She was born August 3, 1948, in Jackson County, TN, to the late Milton Benton Spivey and Evelyn Olene Flynn Spivey. She was a factory worker, and a member of the Church of Christ. In addition to her parents, she was preceded in death by 6 Brothers: James, Richard, Bobby, Dale, Wayne, and Billy Spivey; and 3 Sisters: Sue Buck, Mildred Spivey and Helen Dailey. Survivors include 2 Daughters: Tonya Pritchett of Celina, TN, and Tammy Michelle Goolsby Morgan of Gainesboro, TN; 1 Sister: Judy Stacey of Gainesboro, TN; 4 Grandchildren: Rin Pritchett, Brandon Goolsby, Megan James, and Mikala James; and 1 Great Grandchild: Kaydense Scott. Hosts of several nephews, nieces and friends. Bro. Kenneth Anderson will officiate at the services. Memorial donations may be made to assist with funeral expenses by contacting the funeral home.

The family of Carol Joyce Hammock created this Life Tributes page to make it easy to share your memories.

Send flowers to the Hammock family.