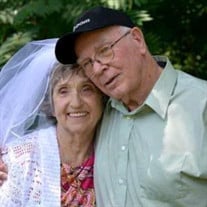 Charles E. Mayberry was born April 17, 1936 in Jackson County, TN, and he passed away on Friday, February 11, 2022 at St. Thomas Midtown Hospital in Nashville, TN, at the age of 85. He was the son of the late Raymond Aubrey Mayberry and Ruby... View Obituary & Service Information

The family of Charles E. Mayberry created this Life Tributes page to make it easy to share your memories.