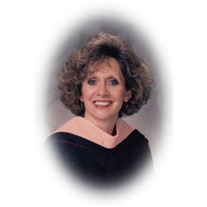 Funeral services for Mrs. Cheryl Carlisle Focer, 62, of Gainesboro, TN, will be held at 11 A.M. on Wednesday, October 1, 2014, at the Union Hill Church of Christ in Clay County, TN. Burial will follow in the Union Hill Cemetery in Clay County, TN. The family will receive friends at the funeral home on Monday from 4 P.M. - 8 P.M., and Tuesday from 11 A.M. - 8 P.M. Visitation will be at the church on Wednesday from 9 A.M. until time of services. She passed away on Saturday, September 27, 2014, at her residence. She was born February 3, 1952, in Indianapolis, IN, to the late Harold Carlisle and Jewel Smith Carlisle. On April 7, 1973, she was married to Bob Focer, who survives. She was a nurse practitioner. She was a member of the Union Hill Church of Christ in Clay County, and the Free State Church of Christ in Jackson County, TN. Survivors include her Husband: Bob Focer of Gainesboro, TN; 2 Daughters: Melissa (Nate) Mainord of Cookeville, TN, and Rebecca (Josh) Brown of Carthage, TN; 4 Grandchildren: Ava Mainord, Brenna Mainord, Haven Brown, and Noah Brown; 2 Brothers: Mark (Marie) Carlisle of the Union Hill community of Clay County, TN, and John (Lynette) Carlisle of the Leonard community of Clay County, TN; and 1 Sister: Tanna (Roger) Short of Celina, TN. Several nieces and nephews also survive. Bro. E.C. Meadows, Bro. Nathan Sherrell, and Bro. Chris Reecer will officiate at the services. In lieu of flowers, memorial donations may be made to the Union Hill Cemetery Fund, Jackson - Smith County Youth Camp, Happy Haven Home, or the donor's favorite charity by contacting the funeral home.

The family of Cheryl Carlisle Focer created this Life Tributes page to make it easy to share your memories.

Send flowers to the Focer family.