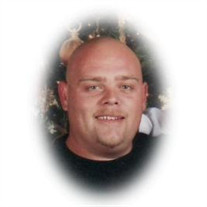 Funeral services for Christopher Kelly Hunter, 35, of Wartburg, Tennessee, will be held at 1 P.M. on Monday, February 20, 2012, at Anderson - Upper Cumberland Funeral Home in Gainesboro, TN. Burial will follow in the Rob Draper Memorial Cemetery in the Stone community of Jackson County, TN. The family will receive friends on Sunday from 4 P.M. - 9 P. M., and on Monday from 9 A.M. until time of services. He passed away on Friday, February 17, 2012, in Smith County, TN. He was born November 8, 1976, in Jackson County, TN, to Doug Hunter and Genivieve Kilmon. He was an electrician, and a member of Local 270 IBEW in Oak Ridge, TN. He was a member of the Family Worship Center in Stephens, TN. He was preceded in death by his Maternal Grandparents: Archie and Avo Kilmon; and his Paternal Grandfather: Buford Hunter. Survivors include 1 Son: Christopher Ryan Hunter of Manchester, TN; 1 Daughter: Lillijan Viola Hunter of Wartburg, TN; the Mother of his Daughter: Veronica Hunter of Wartburg, TN; his Father: Doug (Robin) Hunter of Gainesboro, TN; his Mother: Genivieve Kilmon of Cookeville, TN; his Grandmother: Dorothy Hunter of Gainesboro, TN; 2 Brothers: Brandon Hunter of Smyrna, TN, and Max Hunter of Gainesboro, TN; and 1 Sister: Meghan Hunter of Gainesboro, TN. Bro. Sam Mainord and Bro. Frank Price will officiate at the services.

The family of Christopher Kelly Hunter created this Life Tributes page to make it easy to share your memories.

Send flowers to the Hunter family.