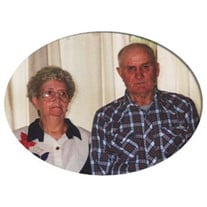 Funeral services for Mrs. Dimple Bryant Huff, age 78, a resident of Granville, TN, will be held Wednesday, March 12, 2008, at 11 A.M. at Anderson - Upper Cumberland Funeral Home in Gainesboro, TN. Burial will follow in the Granville Cemetery in the Granville community of Jackson County. The family will receive friends on Tuesday from 3 P.M. - 9 P.M., and Wednesday from 9 A.M. until time of services. Mrs. Huff passed away on Sunday, March 9, 2008, at NHC Healthcare Center in Cookeville, TN. She was born January 20, 1930, in Putnam County, TN, to the late Johnny and Gracie Bryant. On August 30, 1952, she was married to the late Henry James Huff, who passed away November 27, 2006. She was a homemaker, and a member of the Big Branch Church of Christ and the Liberty Church of Christ. In addition to her husband and parents, she was preceded in death by 2 Brothers: Marshall and Mack Bryant; and 4 Sisters: Ellar Lewis, Lillie Dyer, Verdia Hammock, and Dorothy Bryant. Survivors include 2 Sons: Stanley (Helen) Huff of Bloomington Springs, TN, and Michael (Kathy) Huff of the Freewill community of Jackson County; 1 Daughter: Shirley Upchurch of the Double Springs community of Putnam County; 5 Grandchildren: Shirley Brewer, Sandy Huff, Amber Crawford, Michael James Huff, and Zachary Huff; 3 Great- Grandchildren: Olivia Brewer, Haven Crawford, and Keontay Easter; and 1 Sister: Magalene Sullivan of Cookeville, TN. A host of nieces, nephews, other relatives, and friends also survive. Bro. Edward L. Anderson will officiate at the services.

The family of Dimple Bryant Huff created this Life Tributes page to make it easy to share your memories.

Send flowers to the Huff family.