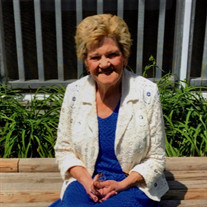 Elsie Webb Flatt - Columbia, TN. Born to the late Pem Webb & JoAnn Martin on April 14, 1937. Surrounded by all of her children, grandchildren, and great grandchildren, she left her home on earth to spend eternity at her Heavenly home on January... View Obituary & Service Information

The family of Elsie Webb Flatt created this Life Tributes page to make it easy to share your memories.

Send flowers to the Flatt family.