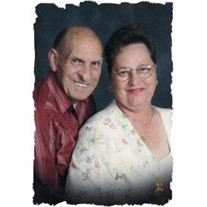 Funeral services for Mrs. Emma Jean Flatt, 68, of Gainesboro, Tennessee, will be held at 1 P.M. on Wednesday, February 8, 2012, at Anderson - Upper Cumberland Funeral Home. Burial will follow in the Flatt - Woolbright Cemetery in Gainesboro, TN. The family will receive friends on Tuesday from 4 P.M. - 9 P.M., and Wednesday from 9 A.M. until time of services. She passed away on Sunday, February 5, 2012, at her residence. She was born March 24, 1943, in Jackson County, TN, to the late Mines Williams and Viola Williams. On December 23, 1959, she was married to Ernest Flatt, who survives. She was a retired factory worker and homemaker, and a member of the New Salem Church of Christ. In addition to her parents, she was preceded in death by 5 Brothers: Oscar, Herman, Vestel, Robert, and James Williams; and 3 Sisters: Mable Williams, Ruby Young, and May Haney. Survivors include her Husband: Ernest Flatt of Gainesboro, TN; 1 Son: Ronnie (Rose) Flatt of Gainesboro, TN; 1 Daughter: Tina (Tom) Wyatt of Gainesboro, TN; 4 Grandchildren: Dustin Flatt, Emily Buckner, Dana Buckner, and Kimberly Flatt; and 1 Sister: Alene Dixon of Gainesboro, TN. Bro. Jimmy Anderson and Bro. Sam Mainord will officiate at the services. Memorial donations may be made to the Flatt family by contacting the funeral home.

The family of Emma Jean Flatt created this Life Tributes page to make it easy to share your memories.

Send flowers to the Flatt family.