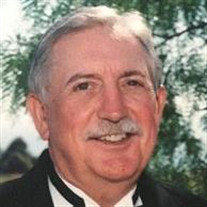 Fred Russell Lynn, 83, passed away on July 27th, 2021, after a lifetime of accomplishments, passions, and friendships. He is survived by his wife of 54 years Peggy, three children Patti, Pam, and Brian, their spouses, Phil, Scott, and Colleen, and seven beloved grandchildren Katie, Caroline, Eric, Allie, Megan, Will, and Dane.He is also survived by two brothers, Jim Lynn and Joe Lynn. Born in Celina, Tennessee, in 1937, he graduated from Celina High School in 1955 as the captain of the high school football team and senior class president. After two years in the United States Army, he graduated from Middle Tennessee State University, moved to Atlanta, Georgia, and married Peggy Porter of South Carolina in 1966. He began a long management career at the Internal Revenue Service which led him to relocate his family to Cincinnati, Ohio, and eventually to Irvine, California in 1983. Fred retired from the IRS after 25 years of service and launched his own successful tax accounting firm in Irvine, Fred Lynn and Associates, where he was beloved by his clients. He eventually began to return to the family farm in Celina, Tennessee for several months each year investing time, money, and energy in creating a beautiful working cattle farm that he cherished and enjoyed immensely. Fred and Peggy also enjoyed spending time in Hilton Head, South Carolina each year where they developed many lifelong friendships. Their permanent home after retirement was in Palm Springs, California, where they were active in the Palm Springs Presbyterian Church. Fred Russell Lynn lived a beautiful life full of family and friends. He enjoyed listening to music, meeting new people, and spending time with his friends and cherished family. Services were held at Upper Cumberland Funeral Home in Gainesboro, TN and Pacific View Mortuary in Newport Beach, CA

Fred Russell Lynn, 83, passed away on July 27th, 2021, after a lifetime of accomplishments, passions, and friendships. He is survived by his wife of 54 years Peggy, three children Patti, Pam, and Brian, their spouses, Phil, Scott, and Colleen,... View Obituary & Service Information

The family of Fred Russell Lynn created this Life Tributes page to make it easy to share your memories.

Send flowers to the Lynn family.