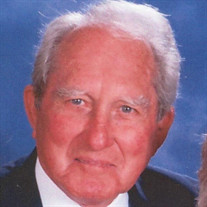 Funeral services for Mr. James E. Bailey, 91, of Gainesboro, TN, will be held on Saturday, August 29, 2020, at 11 A.M. at Anderson Upper Cumberland Funeral Home in Gainesboro, TN. Burial will follow in the John L. Clark Memorial Cemetery in the Stone community of Jackson County. The family will receive friends on Friday from 4 P.M. – 8 P.M., and Saturday from 10 A.M. until time of services. He was born July 12, 1929, in Jackson County, TN, to the late Rad Bailey and Ethel Mosley Bailey. He was married to the late Lora Bailey, who passed away May 16, 2017. He was an electrician, and a member of the McCoinsville Church of Christ. He served in the U.S. Air Force during the Korean War. In addition to his wife and parents, he was preceded in death by 2 Half-Brothers: Campbell and Rhuben Bailey; 3 Sisters: Grace Rodgers, Joyce Hix, and Myrtle Ramsey; and Sister in Law and Brother in Law: Harlin and Jo Poston. Survivors include 1 Son: Ronnie (Sandy) Bailey of Baxter, TN; 2 Daughters: Anita Bailey of Calhoun, TN, and Carolyn Bailey of Lebanon, TN; 3 Grandchildren: Erin (Nathaniel) Clancy, Matthew Bailey, and Austin Bailey; 1 Niece: Linda Vantrease of Lebanon, TN; and 1 Step Grandson: Chase Duncan. Bro. Jimmy Anderson will officiate at the services. Due to COVID 19, the family requests that visitors please wear face masks.

The family of James E. Bailey created this Life Tributes page to make it easy to share your memories.

Send flowers to the Bailey family.