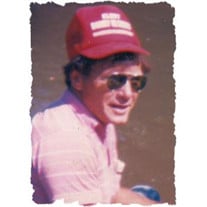 Funeral services for Mr. Jerry P. Scott, 72, of Gainesboro, TN, will be held at 2 P.M. on Monday, February 11, 2019, at Anderson - Upper Cumberland Funeral Home in Gainesboro, TN. Burial will follow in the Fairview Cemetery in the Fairview community of Jackson County, TN. The family will receive friends on Sunday from 2 P.M. - 8 P.M., and Monday from 10 A.M. until time of services. He passed away on Saturday, February 9, 2019, at Mabry Health Care Center in Gainesboro, TN. He was born January 27, 1947, in Gainesboro, TN, to the late Morgan Lee Scott and Mamie Martha Scott. On May 10, 1979, he was married to the late Nancy May Scott, who passed away January 24, 2017. He was a farmer and logger, and a member of the Harmony Church of Christ. In addition to his wife and parents, he was preceded in death by 4 Brothers: Hamp Scott, Walton Scott, Curtis Scott, and Andy M. Scott; and 3 Sisters: Mary Pound, Sally Masters, and Myrtle Phillips. Survivors include 1 Son: Robert Scott of Gainesboro, TN; 1 Daughter: Tammy Kernell of Gainesboro, TN; 1 Granddaughter: Niki (Justin) Cobble of Gainesboro, TN; 2 Great Grandchildren: Trent George and Kane Cobble; 2 Brothers: Richard Scott of Gainesboro, TN, and Odell (Marie) Scott of the Dodson Branch community of Jackson County, TN; and 3 Sisters: Matilda Stewart of Cookeville, TN, Carolyn (Wade) Burris of Gainesboro, TN, and Cathy (Charles) Stafford of Algood, TN. Bro. Danny Scott will officiate at the services. Memorial donations may be made to the Fairview Cemetery by contacting the funeral home.

The family of Jerry P. Scott created this Life Tributes page to make it easy to share your memories.

Send flowers to the Scott family.