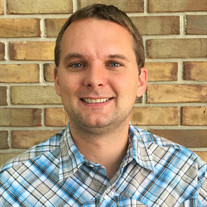 Dr. Joel David Gaw, 36, passed from this life on October 09, 2021. Dr. Joel is survived by his parents, Dr. Ted and Janice Gaw of Gainesboro, TN; his brothers Eric (Lacey) Gaw of Lawrenceburg, KY and Dr. Brad (Sarah) Gaw of Whitleyville, TN; Nieces Savannah, Raina, and Caroline Gaw and nephew Regan Gaw; many Uncles, Aunts, cousins and friends also survive. Dr. Joel was preceded in death by his paternal grandparents Jack and Nancy Gaw and his maternal grandparents David and Peggy Breshears. He was born on November 26, 1984 in Cookeville, TN. He was a 2003 graduate of Jackson County High School, a 2007 graduate Tennessee Technological University, and a 2011 graduate of the University Of Tennessee, Memphis, School Of Dentistry. Dr. Joel practiced dentistry at Gaw Family Dentistry (Gainesboro & Cookeville) and Cookeville Regional Dental Associates. Dr. Joel was a wonderful Christian example in this world. He was a member of the Zion Church of Christ. He served on several mission trips abroad, at many youth events and during church services. He was a kind and giving soul who always had a smile which is how he will be remembered in the hearts of all the lives he touched. Visitation for Dr. Joel will be on Tuesday, October 12, 2021 from 5 - 8 P.M. and again Wednesday, October 13, 2021 from 9 A.M. until 11 A.M. at Anderson Upper Cumberland Funeral Home in Gainesboro, TN. Funeral services will be held on Wednesday, October 13, 2021 at 11 A.M. at Anderson Upper Cumberland Funeral Home. Burial will follow at Zion Cemetery. In Lieu of flowers, memorials may be made to the India Mission Fund or other charity of your choice by contacting the funeral home. Anderson Upper Cumberland Funeral Home is in charge of arrangements. 931-268-1550

The family of Dr. Joel David Gaw created this Life Tributes page to make it easy to share your memories.

Send flowers to the Gaw family.