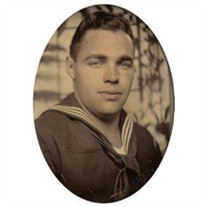 Funeral services for Mr. Jonah R. Stewart, 86, of Gainesboro, Tennessee, will be held at 2 P.M. on Saturday, September 30, at Anderson - Upper Cumberland Funeral Home. Burial will follow in the John L. Clark Memorial Cemetery in the Stone community of Jackson County. The family will receive friends Friday from 10 A.M. - 9 P.M. and on Saturday from 9 A.M. until time of services at Anderson - Upper Cumberland Funeral Home. Mr. Stewart passed away on Tuesday, September 26, 2006, at the Livingston Regional Hospital in Livingston, TN. He was born January 23, 1920, in Jackson County to the late Henry Stewart & Mattie Harris Stewart. On August 10, 1940, he was married to Ethel Stewart, who survives. Mr. Stewart was a factory worker. He served in the U.S. Navy during World War II. In addition to his parents, he was preceded in death by 2 Brothers: Henry Clay Stewart and an infant brother; and 2 Sisters. Survivors include his wife: Ethel Stewart of Gainesboro, TN; 3 Daughters: Barbara Stewart of Gainesboro, TN, Jean (Joe) Brieter of Michigan, and Shirley Clark of Michigan; 2 Brothers: Kenneth Stewart of Lebanon, TN, and Lewis Stewart of Gainesboro, TN; and 3 Sisters: Annie Stewart of Gainesboro, TN, Nellie Puckett of Indiana, and Mabel Brown of Cookeville, TN. 11 Grandchildren, 22 Great-Grandchildren, and 5 Great-Great-Grandchildren also survive.

The family of Jonah R. Stewart created this Life Tributes page to make it easy to share your memories.

Send flowers to the Stewart family.