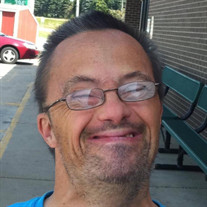 Kevin moved from our lives to our hearts on June 24th, guided by God’s loving hands. Kevin was born in 1965 and came into our lives through foster care. We don’t know much about his early life. He showed up with a cat named NO Name and quickly stole our hearts. He was happy to live in the gregarious shadow of his brother Bruce. Always the quiet wingman to Bruce’s antics. They were thick as thieves. They attended Beatle School together until graduation. Bruce passed in 1981 and after a long period of mourning, Kevin crept out of his quiet shell and came into his own, showing off his own larger than life personality. He adored practical jokes and would hide and say boo, or zip up his Spider-Man hoodie and sit quietly until you noticed. Then he’d laugh, his infectious laugh. After his 21st birthday we were finally allowed to adopt him. He went to work at Dakotabilities, enjoying an unending parade of friends and staff. He spent one day a week working at a frame shop, and one day a week working in the mail room at Citibank. He worked at Bucket Dogz Homemade Treats, packaging and selling at dog shows, where he would only sell to the pretty girls and abandoned those he felt unworthy to other members of the team to serve. He had many interests including singing in the choir at church, swimming and bowling. He enjoyed wrestling, Dukes of Hazard, spongebob and all the superheroes, with Batman being his favorite. He won countless Special Olympics metals in swimming and track. He taught the dog to play frisbee and later went onto compete in disc. Animals loved his gentle nature and even feral kittens deemed his lap the safest place to nap. He loved going to the campground where his sister has a cottage and begged for every day to be Friday so he could go back. Campfires, friends and ONE beer made is week complete. Dancing was a passion and he would grumble thru the bride/ groom and father/ daughter dances at weddings, convinced the band was there just for him. He adored music and even the saddest, slowest song was rock and roll to him. He never learned to play guitar but that didn’t stop him from playing his passionately. He absolutely loved singing Happy Birthday. He could not wrap his head around eating cake without it being SOMEONE’s birthday. So we took turns. Kevin never met a stranger and left a piece of his heart with nearly everyone he met, often taking a piece of theirs with him. More than anything, Kevin loved his family. He tended babies, entertained toddlers, and followed school age kids into whatever trouble they could find. In our family, he was the litmus test for growing up. Our tweens all aspired to be taller than Kevin. The kids grew up, learned to drive, got jobs, moved away and had children of their own. He never felt any resentment and was happy to rock the next generation of babies. Kevin was a gift to the people who knew him and a lesson to all of us to make whatever you’re doing fun, carry joy in your heart, always, and love your family, warts and all. He rejoins his beloved mother and his brother Bruce, to sit at God’s side, and rock his nephew Gus, the born sleeping child, that our family was denied. He leaves behind a devastated family, including a brother Scott Abbas(Sue), three sisters, Jaime Abbas Restorff (Neil), Laine Larson (Shannon), Kelly Abbas (Jeff)and a ton of broken hearted nieces and nephews, cousins and friends. There will be a celebration of life at his beloved Sugar Shores in Shirland Illinois as well as one in Sioux Falls, SD. Dates/Times to be announced. Anderson Upper Cumberland Funeral Home in charge of services. 931-268-1550

Kevin moved from our lives to our hearts on June 24th, guided by God&#8217;s loving hands. Kevin was born in 1965 and came into our lives through foster care. We don&#8217;t know much about his early life. He showed up with a cat named NO Name... View Obituary & Service Information

The family of Kevin Bradley Davies created this Life Tributes page to make it easy to share your memories.

Kevin moved from our lives to our hearts on June 24th, guided...

Send flowers to the Davies family.