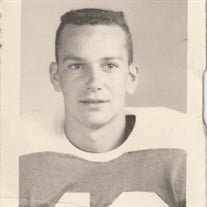 L.B. Johnson, 79, passed away peacefully dressed in orange and surrounded by his family on May 23, 2020. His name was truly just initials, despite the variations he told thousands over the years. Known as B and Jo since they had grandchildren, he and Jo Kathryn were married for 57 years. Her love and smarts were all he ever needed or wanted. L.B. worked at Twin Lakes Telephone Co. in his younger days. He and his fearless friends worked for the City of Cookeville Electric Department in his early career also. He helped bring in and became the owner of the Baxter Bee Hive restaurant in the 70s, giving families a great place to eat and socialize. He changed to a new career in the insurance industry, which included working with Jack Meadows in Gainesboro. In 1975, he opened L.B. Johnson Insurance in Baxter. Later the agency moved to Cookeville, and in total, his insurance career spanned 40 years. Born and raised in Liberty, Tennessee, he gained legendary status as an athlete in Jackson County. His football and basketball exploits remain vivid to those who played and watched him. L.B. refereed high school basketball for several years across the Upper Cumberland. He made friends and foes in gyms along the way, but all agreed he was fair and fun. He made hundreds of children better ballplayers, or at least happier ballplayers, by coaching Jr. Pro basketball, Little League baseball, and girls youth softball in Baxter and Cookeville. Every girl or boy who ever played for him was an honorary daughter or son, with access to his help and heart. He worked hard, played hard and loved well. He played competitive 3-on-3 basketball tournaments until age 60. He sat with the sick and grieving when they needed to talk. He rushed to the side of his family and friends when they needed brute force to get a job done. He taught Sunday School at Baxter Church of Christ for teenagers, toddlers and elementary school kids. He drove the Willow Avenue Church of Christ bus for years, making passengers feel special and loved. He gave freely of himself to serve God and others. He and Jo moved to Cookeville three years ago, but they were proud former residents of Friendly Road in Baxter where they lived for more than 40 years and celebrated July 4th with style. L.B. taught us the best way to love and leave: happy. His office sign said it all. God. Family. Big Orange. Coach Phillip Fulmer called L.B. late in his personal fourth quarter to get advice and thank him for his loyalty to the Big Orange. He is survived by his wife, Jo Kathryn, three children and their spouses, Karen Lykins and husband, Dave; John (Jack) Johnson and wife, Leanne; Jim Johnson and wife, Kristie; and four grandchildren, Isabella, Alana, Olivia, and Drake, who owned his heart. He is also survived by a sister, Elizabeth Philpot. He was faithful and loving to them all. He was preceded in death by his mother, Betsy Maberry Johnson and father, William Bice Johnson; two brothers, JW and Rowis Johnson; and three sisters, Margaret Vaughn, Lucille Duke, and Marie Shouse. The family sends great love and appreciation to Morgan, the owners, the staff and all his friends at The Gables; to our Willow Avenue family who poured out their love; and to the Caris nurses and aides who made one amazing Rocky Top celebration possible. A private family graveside service will be held. Family and friends will be invited to a kickoff party at a later time to tell stories and laugh. Anderson Upper Cumberland Funeral Home assisting the family with arrangements. 931-268-1550

L.B. Johnson, 79, passed away peacefully dressed in orange and surrounded by his family on May 23, 2020. His name was truly just initials, despite the variations he told thousands over the years. Known as B and Jo since they had grandchildren,... View Obituary & Service Information

The family of L. B. Johnson created this Life Tributes page to make it easy to share your memories.

L.B. Johnson, 79, passed away peacefully dressed in orange and...

Send flowers to the Johnson family.