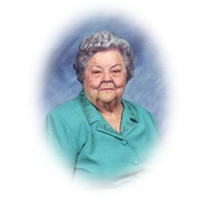 Funeral services for Mrs. Marie Anderson Clark, 90, of Gainesboro, Tennessee, will be held at 11 A.M. on Wednesday, July 8, 2009, at Gainesboro Church of Christ in Gainesboro, TN. Burial will follow in the John L. Clark Memorial Cemetery in the Stone community of Jackson County, TN. The family will receive friends at Anderson - Upper Cumberland Funeral Home on Tuesday from 5 P.M. - 9 P.M., and at the Gainesboro Church of Christ on Wednesday from 9 A.M. until time of services. Mrs. Clark passed away on Monday, July 6, 2009, at Cookeville Regional Medical Center in Cookeville, TN. She was born September 6, 1918, in Jackson County, TN, to the late Vance L. and Ruby Johnson Anderson. She was married to the late Willard Clark, who passed away in 1962. A graduate of Tennessee Tech University, she received both, her bachelor of science and master of arts degrees. She retired after teaching in the Jackson County school system for 40 years. During the World War II years, she worked in Detroit, MI in the wartime effort. She taught in many different schools in Jackson County, but her last 22 years were spent at Fox Elementary. Mrs. Clark was a member of the Gainesboro Church of Christ. She served 13 years as President of the Jackson County Retired Teachers Assoc. and 10 years as chairman of the Jackson County Cancer Society. She did 24 years of volunteer work at the local nursing home. In addition to her husband and parents, she was preceded in death by 3 Sisters: Nancy Carolyn Anderson, Madge Chaffin, and Nell Smith; and 1 Brother: Bryan Anderson Survivors include 3 Brothers and Sisters-in-law: Leo (Gay) Anderson of Ringgold, GA; Paul (Darlene) Anderson of Portland, TN; and David (Linda) Anderson of Madison, TN; 1 Sister: Helen Stanford of Dickson, TN; and 18 nieces and nephews. Bro. Edward L. Anderson and Dan Smith will officiate at the services.

Funeral services for Mrs. Marie Anderson Clark, 90, of Gainesboro, Tennessee, will be held at 11 A.M. on Wednesday, July 8, 2009, at Gainesboro Church of Christ in Gainesboro, TN. Burial will follow in the John L. Clark Memorial Cemetery in the... View Obituary & Service Information

The family of Marie Anderson Clark created this Life Tributes page to make it easy to share your memories.

Send flowers to the Clark family.