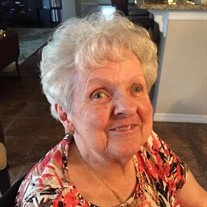 Marilyn Ann Smith, 80, formerly of the Dodson Branch Community in Cookeville, Tennessee graduated into heaven Thursday, May 13, 2021 after suffering from a severe stroke. Marilyn was born to Arberta Hazel Smith and Claire Raymond Lane on December 10, 1940 in Elmira, New York and lived in this vicinity. The family owned and operated a farm and was familiar with rural living. Marilyn was taken to church by her family and met Jesus at the age of 14. She was raised with five siblings, one of whom her closest sister’s boyfriend at the time introduced her to her future husband, Doug Smith, both active in the U.S. Navy. Marilyn and Doug began to communicate primarily by written correspondence. On October 27, 1958, they united in marriage at the Ryan Road Missionary Baptist Church of Warren, Michigan. The next 31 years Marilyn spent her life with her husband serving in this growing church, singing in a ladies’ trio, participating as an alto voice in the choir and actively attending whenever the doors were opened. She also played the piano for Sunday School. Marilyn was employed for 10 years by the U.S. Postal service during the 60’s and 70’s. Following Doug’s retirement with GM in 1989, Marilyn moved with her husband to Cookeville, Tennessee where a home was built and once again, country life became the norm. Marilyn loved to laugh and was a gentle, kind soul always on the edge with a good comeback. In her earlier years, she was a seamstress and enjoyed making crafts as well as canning and gardening. Camping trips with family were always a hit. In her later years, she enjoyed her friends, church, family, grandkids, and gardening. In 2012, she moved with her husband to Central Florida in order to be cared for by their family members on a daily basis. Marilyn spent the last 4 years residing in a nursing home establishing many friendships and acquaintances with workers and residents and her nickname there was “Giggles”. She loved people and they loved her! She is preceded in death by her husband, Charles “Doug” Smith (2016), her parents Arberta Keeney and Claire Lane, a brother Richard Lane, great-grandson Samuel Schirle and other aunts, uncles and cousins. She is survived by her two dearly beloved children, Rhonda Schirle of Orlando, Florida and William Smith of Denver, Colorado, four grandchildren Jeremy Schirle (Tampa) Janae Schirle (Orlando), Neikel Smith Trostle (Denver), Krisha Smith Fairchild (Denver) and 4 great-grand children (Connor Gomez, Jayden Schirle, Israela Schirle, Raven Trostle) and one on the way; 4 sisters, Lois Rumsey (Odessa, NY), Beverly Carl (Cookeville, TN), Patricia States (Seattle, WA) and Roberta Sheesley (Odessa, NY) along with many other nieces and nephews. Visitation will be held at the Anderson Upper Cumberland Funeral Home, 2131 South Grundy Quarles Hwy., Gainesboro, Tennessee (931) 268-1550 on Thursday, May 20th from 6 to 8pm. Celebration of Life service will follow the next day, Friday, May 21st at 11AM same location. Interment will follow at the Dodson Branch Cemetery in Jackson County. Services will be under the direction of the funeral home and officiated by family members. Flowers or plants are welcome. Anderson Upper Cumberland Funeral Home in Gainesboro, TN in charge of arrangements. 931-268-1550

Marilyn Ann Smith, 80, formerly of the Dodson Branch Community in Cookeville, Tennessee graduated into heaven Thursday, May 13, 2021 after suffering from a severe stroke. Marilyn was born to Arberta Hazel Smith and Claire Raymond Lane on December... View Obituary & Service Information

The family of Marilyn Ann Smith created this Life Tributes page to make it easy to share your memories.

Send flowers to the Smith family.