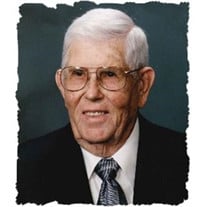 Funeral services for Mr. Ray O. Hix, 91, of Gainesboro, Tennessee, will be held at 10:30 A.M. on Saturday, September 27, 2014, at Anderson - Upper Cumberland Funeral Home in Gainesboro, TN. Burial will follow in the Rob Draper Memorial Cemetery in the Stone community of Jackson County, TN. The family will receive friends on Friday from 5 P.M. - 8 P.M., and Saturday from 9:30 A.M. until time of services. He passed away on Wednesday, September 24, 2014, at his residence in the Flynns Lick community. He was born December 21, 1922, in Jackson County, TN, to the late Winton L. Hix and Zula Odum Hix. On April 30, 1946, he was married to Margaret Haile Hix, who survives. He was a farmer and former owner of Hix Brothers Tractor Service. He was a member of the Flynns Creek Church of Christ, where he served as an Elder for over 50 years. He was a graduate of Jackson County High School, and an active member of the Black Angus Cattle Association and the Jackson County Cattleman's Association. In addition to his parents, he was preceded in death by 1 Brother: Alvin A. Hix. Survivors include his Wife: Margaret Haile Hix of Gainesboro, TN; 1 Daughter: Cathey Hix (Gerry) Brown of Parker, CO; 1 Granddaughter: Jessica Brown (Malcolm) Young of Arvada, CO; and 3 Sisters: Violet Loftis of Cookeville, TN, Frances Shelby of Madison, TN, and Mattie Lou Hunter of Madison, TN. Several nieces and nephews also survive. Bro. Mike Fox will officiate at the services. In lieu of flowers, memorial donations may be made to the Alzheimer's Association by contacting the funeral home.

The family of Ray O. created this Life Tributes page to make it easy to share your memories.

Send flowers to the O. family.