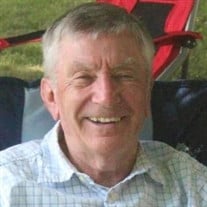 Raymond Elliott Bentley affectionately known too many as Mr. B, and to his family as Elliott, passed away after an extended illness on September 26, 2021. He was born in Cadiz, KY on July 18, 1935. Visitation and celebration of life will be held at Anderson Upper Cumberland Funeral Home in Gainesboro, TN on Wednesday September 29, 2021 from 10:00am-8:00pm and Thursday September 30, 2021 from 10:00am-12:00pm with the funeral to follow at 12:00pm. He was preceded in death by his parents Bob Burnam and Mary Lou Bentley; his brother Daniel Ellis Bentley and brother in law J.D. Joines all of Kentucky. Survivors include his wife of forty years Marcella Bybee Bentley; his children Kati Bentley, Laci(John) Flynt, Jennifer Bentley, Beth(Tim) Shelton, and Mike Bentley. His Grandchildren Cade and Brix Flynt, Albert and Helen Brown, and Bentley Cunningham. His sister Nola Joines and sister in laws Mary Ellen Bentley and Nancy Bybee. A proud Boy Scout, Educator, Coach, Dad, and Pa a man of many names whose life impacted so many. As an educator he instilled the love of science too many a student in his time at Fox Middle School and Jackson County High School. He coached boys and girls basketball at Fox and Jackson County High, and girls softball where he worked with parents' support and helped create the Girl’s Softball league in Jackson County. He was admired by his players and students and received awards for his mentorship and coaching. He was an active member of the First Baptist Church of Gainesboro, TN where he sang in the choir and served God in one of many ways. Jimmy Anderson and Kelly Stockton will lead in the celebration of life. His pallbearers John Cason, Brandon Chaffin, Kenneth Davis, Andy Graves, Terry Lawson, and Kent Shepherd. Special thanks to UCHRA and Signature healthcare nurses and staff. In lieu of flowers we ask that donations to be made to Jackson County High School Girl’s softball team or charity of your choice.

Raymond Elliott Bentley affectionately known too many as Mr. B, and to his family as Elliott, passed away after an extended illness on September 26, 2021. He was born in Cadiz, KY on July 18, 1935. Visitation and celebration of life will be... View Obituary & Service Information

The family of Raymond Elliott Bentley created this Life Tributes page to make it easy to share your memories.

Raymond Elliott Bentley affectionately known too many as Mr....

Send flowers to the Bentley family.