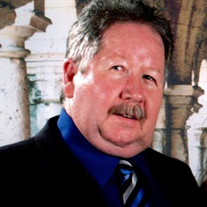 Raymond Harold Hensley 67 of Jackson County passed away at his home on Saturday, April 17, 2021. Visitation will be on Sunday, April 18, 2021 at the Liberty Church of Christ, 6280 Liberty Church Rd, Cookeville, TN 38501 beginning at 2 pm. Visitation will also be from 10 am to 2 pm on Monday, April 19, 2021 at the church. Funeral Services will be at 2 pm on Monday at the church with Bro. Clarence Deloach officiating. Burial will follow in the Morgan Pippin Cemetery. Family ask that all donations be given to the Liberty Church of Christ. Raymond was born June 7, 1953 in Jackson County to Ben Elvin Hensley and Ila Louise Hensley. He was a veteran of the US Air Force, 3702 Squadron and served four tours in the Vietnam War. In 1986 Raymond dedicated his life to God and became a Christian. This began his passion for preaching which he did for 24 years. Raymond had many passions that helped him impact so many lives. From 1991-1998 he coached girl's youth basketball. For 20 years he worked for Institutional Wholesale until he opened SRC, Small Engine Repair Shop in 2005. In all the passions, Raymond touched countless lives. Raymond is survived by his loving wife Catherine Thompson Hensley who he married July 1, 1973 for a total of 47 years of marriage; son, Shawn (Nella) Hensley of Granville; daughter, Sheena Hensley of Rickman; mother, Louise Hensley of Cookeville; brothers, Roger (Debbie) Hensley and Glen Hensley both of Cookeville; sister, Rita (Alfred) Durbin of Cookeville; grandchildren, Katelyn Lopez, Rebekah Morin, Erin Hensley and Caleb Hensley; great grandchildren, Josiah Lopez, Ronan Morin and Phoenix Morin; nephews, Ben Hensley, Bo Hensley, Matt Durbin, Mark Holloway and Luke Holloway; nieces, Misty Allison and Rachel Conner. Mr. Hensley was preceded in death by his father, Ben Hensley. Anderson Upper Cumberland Funeral Home in charge of arrangements. 931-268-1550.

Raymond Harold Hensley 67 of Jackson County passed away at his home on Saturday, April 17, 2021. Visitation will be on Sunday, April 18, 2021 at the Liberty Church of Christ, 6280 Liberty Church Rd, Cookeville, TN 38501 beginning at 2 pm.... View Obituary & Service Information

The family of Raymond Harold Hensley created this Life Tributes page to make it easy to share your memories.

Raymond Harold Hensley 67 of Jackson County passed away at his...

Send flowers to the Hensley family.