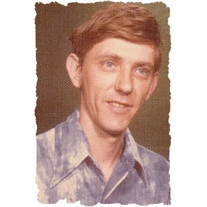 Funeral services for Mr. Roy Gene Hawkins, 67, of Cookeville, TN, will be held at 1 P.M. on Sunday, January 22, 2017, at Anderson - Upper Cumberland Funeral Home in Gainesboro, TN. Burial will follow in the Smith Chapel Cemetery in Putnam County, TN. The family will receive friends on Saturday from 5 P.M. - 9 P.M., and on Sunday from 10 A.M. until time of services. He passed away on Thursday, January 19, 2017, at his residence in the Dodson Branch community of Jackson County. He was born March 6, 1949, in Jackson County, TN, to the late Allen Hawkins and Anna Bull Hawkins. On October 16, 1970, he was married to Donna Sue Poe Hawkins, who survives. He was a line clearing contractor in the utility industry, and a member of the Mt. Union Methodist Church. In addition to his parents, he was preceded in death by 1 Brother: Alan Dean Hawkins. Survivors include his Wife: Donna Hawkins of Cookeville, TN; 1 Son: Roy "Bud" Hawkins II of Cookeville, TN; 1 Daughter: Kimberly (Jeff) Allen of Cookeville, TN; 3 Grandchildren: Ashley Glass, Amber Hawkins, and Joshua Allen; 2 Sisters: Earlene (Leon) Nevins of Avon, Indiana and Irene (Fred) Gamble of Avon, Indiana; and 2 Special Friends: Austin Allen and Anthony Smith. A host of nieces, nephews, other relatives and friends also survive. Bro. Jimmy Anderson will officiate at the services.

The family of Roy Gene Hawkins created this Life Tributes page to make it easy to share your memories.

Send flowers to the Hawkins family.