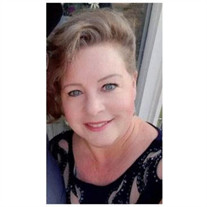 Shawn Kelly Smith, 49, of Algood, Tennessee was suddenly called home to be with the Lord Tuesday, February 8, 2022. Shawn leaves behind a loving husband, Michael A. Smith and Step-Son Evan Smith. Additionally, she is survived by Father Colonel Larry Wayne, Step-Mother Lois Shaw Wayne, Father-in-Law Bob Smith, Step-Sisters Tangie Best (Reverend Ronnie), Kristi Ferree (Randy), Brother-in-Law Shane Smith, and Step Brother Ricky Shaw. Shawn is survived by a number of aunts, uncles, cousins, nieces and nephews. She was preceded in death by her Mother, Patricia Stone Wayne and Mother-in-Law Sarah Sircy Smith. Shawn was a vibrant, full of life, outgoing personality that immediately lit up the room when she entered. Her loving spirit touched many during her short life and she is sorely missed by all those who loved and knew her. She was a District Sales Manager for Performance Foodservice and her customers were as much family as they were clients. Shawn was a dedicated foodie and amazing cook! Few could match her culinary skills. She loved to travel with the love of her life, Mike. Cruising and the Caribbean beaches were their favorites. Shawn was an avid Big Orange football fan. Her special love was their Bulldogs, Penny (Poo) and Sarabi (aka Squishy Tusshy). Receiving of friends and family is at Anderson Upper Cumberland Funeral Home, Gainesboro, Tennessee Saturday, February 19, 2022 between the hours of 1:00PM and 3:00 PM. A funeral service will follow. The family will conduct a private interment of her ashes at a later date. Contributions in her memory can be made to the Cookeville/Putnam County Animal Shelter, 2650 Gainesboro Grade, Cookeville, TN 38501. Anderson Upper Cumberland Funeral Home in charge of arrangements. 931-268-1550

Shawn Kelly Smith, 49, of Algood, Tennessee was suddenly called home to be with the Lord Tuesday, February 8, 2022. Shawn leaves behind a loving husband, Michael A. Smith and Step-Son Evan Smith. Additionally, she is survived by Father Colonel... View Obituary & Service Information

The family of Shawn Kelly Smith created this Life Tributes page to make it easy to share your memories.

Send flowers to the Smith family.